I actually bought this rhubarb plant in Mid October. If I hadn't known better, I might have thought it was dead. In fact, when I came to pot it up a week or so later, I was a little perturbed as despite the fact the pot it came in was almost 30cm/12 inches deep, when I turned it out, the actual rhubarb roots only went down about 10cm/4 inches.

Nothing ventured....I transferred it to a pot which is about 22.5cm/9 inches wide and 30cm/12 inches deep. I almost made the mistake of leaving the crown exposed....seemed the thing to do. But luckily I remembered it should be covered so I used some coir I had reconstituted to cover it with about 2.5cm/1 inch. I placed the pot near the house (just under the kitchen window) and that was that.

Coir is amazing stuff ....but more about that in a later post.

Anyway, I popped out to take a picture of it for this post and what did I find? A new shoot has come up already! It was only 2 weeks ago that it looked so unpromising. Being the doubting Thomas I am, I even gently pulled away some of the earth as I was convinced it was some stray plant which had managed to find its way in the pot. But no. It is RHUBARB!

It's been a long time since I last grew it and even then, I inherited it with the house and never took much notice of how it grew.

I am beside myself with joy. Here's the proof. 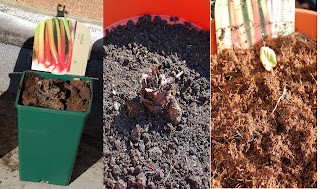