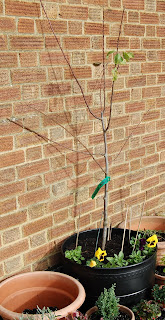 Spent a pleasurable couple of hours potting up most of my newly acquired plants. The plum tree which is about 5ft tall, has gone into what the shop labelled as a 'potato tub' which is about 2½ ft in diameter and 18 inches deep. The last plum tree I grew, many MANY years ago, was in a slightly smaller container, so I am confident this tub will be plenty big enough.

I can't start training it straight away because I am going to have to prune some of the small branches right back to the trunk, but with plum trees, winter pruning isn't advisable because of the risk of a disease called silver leaf, so I'll have to wait until late February/March to start.

When buying my plum tree, a made a couple of impulse purchases, one of which was a tray of 6 winter pansies. I should really have bought at least 2 trays to make a really good display but, as with most impulse buys, I wasn't really thinking properly. Anyway, I've put them all in with the plum tree. Looks a bit sparse at the moment but hopefully they'll bulk up.

My next job to do with the plum tree will be to fix the wires to the wall. Yes, I know I am supposed to have done that first, but in this particular case, I don't thin it will make much difference.

More about my other newly purchased fruit plants in my next post
Posted by Plum at 13:32