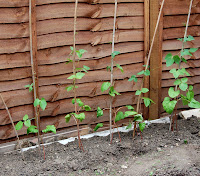 Having had a few days of remarkably warm weather today started off very miserably. Cool, dull and rainy. Good job I set aside last Sunday for gardening. I worked solidly for a few hours and managed to get everything planted out, potted up and thinned out. Today all is looking very well indeed, particularly my runner beans which are winding up the canes with no problem whatsoever.

I decided just to thin the cabbage and broccoli seedlings which have come up in the main garden bed as they seemed a little too small to transplant. Carrots have germinated too but no sign of the parsnips.

Once I'd done all the hard work, I sat to survey my handywork when something caught my eye. Could it be....really...YES! A teeny weeny plum. On closer inspection not 1 or 2 or 3 but 4 tweeny weeny plums on my new plum tree. I will be very interested to see how they develop and ripen in their semi-shaded position. 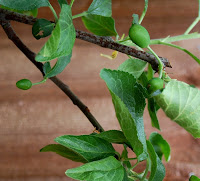 I have been very naughty.

I twisted my ankle in bed on Sunday night. NononononoNO - the naughty bit is that I left my indoor raised beans out all day on Monday and...last night, albeit semi protected with some glass panes, because I was hobbling around and I just knew if I tried to bring them in I'd probably drop them.

The good news is that, so far, they seem to have survived the experience and are doing extremely well. In fact, I'm sure if I watch them carefully, I can see them growing right before my eyes. I've even had to put peasticks into the pots to keep them from tangling themselves together.

I'm not sure if it was the very weak feed solution I gave them on Sunday or just being outside, but whatever it is, I am thrilled at how they have perked up. With the weather forecast being so good for the next few days, I am hoping to get them out into the open ground before long.
Posted by Plum at 11:42 No comments:

My indoor runner beans are showing signs of.....something. And it doesn't seem to be a good something either.

The leaves are drooping inwards. There are no critters on them and they don't need water so I think it's the delay in getting them outside.

So I'm going to take the chance (as it's such a lovely day) and put them outside for an hour or so a bit later once the sun is out and it warms up a bit, in the hope that they will realise there are better things to come for them once the weather perks up permanently.

My indoor sown plants have been a little too successful. They are romping away with many having sprouted their first true leaves. Problem is with the weather having turned quite cold, I am concerned that I won't be able to start putting them outside to harden them off for a while, which might make them go weak and straggly. Having said that, although the forecast isn't looking good, it is lovely and sunny here today and not too cold.

In the meantime, I've started warming up the soil where the runner beans are going to be planted against the fence. I'm using some old double glazing panes which I found in the garden when I moved in and have just leant them against the fence in the hope that the little sun I'm getting will warm up the soil a bit.

As I mentioned in an earlier post, I'm going to plant out the indoor raised beans once it gets warmer and at the same time, sow some seed direct in the soil so hopefully, my warming attempt will help those to germinate more quickly.

As you can see from the picture, the indoor sown beans are going mad and are already over 30cm/12" tall.

Too wet for gardening

We've had heavy bouts of rain from Friday - not that I'm complaining. In any event, there's not much to do in my tiny plot at the moment and it stops me going out every 5 minutes to see if any of the seed I've sown has germinated.

As I mentioned in my last post, I've designated a strip against the fence to grow some climbing green beans. I decided to give half of them a head start by sowing some in pots indoors. My plan is to plant them out after all risk of frost and, at the same time, sow some extra seeds direct in the ground so hopefully, I'll get an extended cropping season with the outdoor ones producing beans a little later than the indoor sown ones.

I am delighted that the beans I sowed in pots a week or so ago have started germinating. 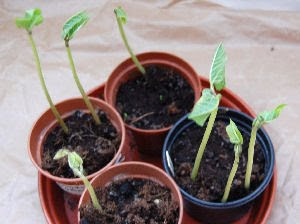 I also sowed some pumpkin (shown in the picture below) courgettes, coriander, parsley and cherry tomatoes which have all started germinating too. 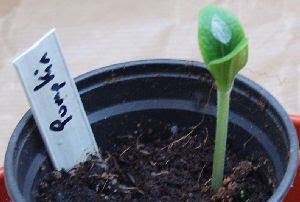 Am now looking forward to the weather getting warmer and sunnier although it will take a number of days to harden the indoor seedlings off before planting out in their final positions.
Posted by Plum at 12:09 No comments: