Well, it's been quite a while since my last post and in truth, not much has been going on in my garden which is now white with several inches of snow.

I did however manage to harvest the last of my root crops before the bad weather which was lucky. Unfortunately, some of the results weren't great as you can see in the picture. The potatoes, which were really just an afterthought to fill some space in one of the shadiest parts of the garden, did relatively well, as did the carrots but the parsnips were a bit of a disaster with not many germinating and the few which did being very small. There again, I didn't really do much with any of these during the growing season so I suppose I should be greatful I got any produce at all. 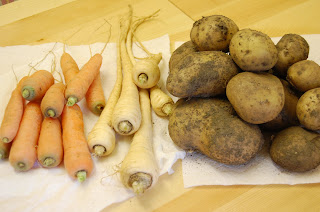