It's been a while since my last post as nothing much is happening in my little garden. Everything is beginning to look tired and nearing the end of its cycle. I am however still harvesting.

On Sunday we had a boiled Gammon joint so it was a good recipe with which to try the first cabbage of the season. They haven't done that well and I only have 4 on my tiny plot as they tend to take up quite a lot of space (relatively speaking) for quite a long time. I doubt I'll grow them again next year. 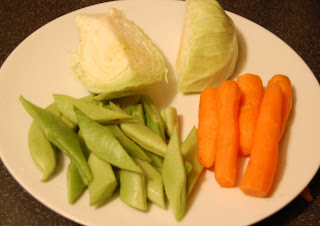 As can be seen from the picture, I also harvested a few carrots the last of the runner beans - they were actually a little stringy but still very tasty - and was somewhat surprised to find perfect new flowers on the bean plants but I know they won't come to anything as it's far too late in the season.
Posted by Plum at 07:18