Whatever happened to the plum tree?

Returning visitors may remember that back in October 2009 I bought a plum tree which I planned to grow in a large tub. I was planning on training it as a fan, but my new small garden couldn't accommodate that, so I ended up just pruning it back in May to keep it within the space available.

Although it survived the house move in tact, throughout the season it began to look more and more poorly. I wasn't expecting many fruit as it's a young tree, but the leaves began showing signs of stress, browning badly at the edges, and of the 5 or 6 fruit which did set, all but 2 fell off. I couldn't find any insects or bugs and it wasn't the dreaded silver leaf disease. I have come to the conclusion that, despite being in the shade for much of the day, I wasn't watering it sufficiently. Something for me to bear in mind next year. 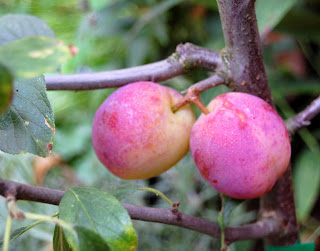 Be that as it may, the remaining two plums have ripened up well and are ready to harvest. According to The Met, it's supposed to be sunny for the next 2 days so I am going to leave them for a couple more days before I pick and eat them. Looking forward to that.

Am still harvesting (and freezing) lots of runner beans although the dwarf French beans seemed to have given up the ghost. Still lots of Swiss Chard and the tomatoes are beginning to turn red....one by one. Lots of mini pumpkins too but still only one marrow :( and a couple of my cabbages have been mercilessly attacked by something despite my other half having religiously inspected them every day and picked off cabbage white eggs, caterpillars and little snails.
Posted by Plum at 11:14