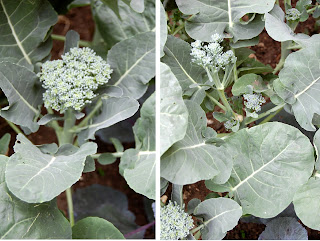 In an earlier post I said I'd cut the first broccoli heads and that the plant would then shoot out more spears. I think I may have done that incorrectly.

I left one plant just as it was - no cutting at all (on the left in the picture)- just to see what happened and it would seem that there was no need for me to cut the others to bring on more spears as the one that's left is doing ok as it is and looks as though it's going to break into tenderstems by itself.

Oh well - at least I got to eat some early broccoli with the added bonus that I'll be getting more spears in the near future as can be seen from the picture on the right.
Posted by Plum at 11:57