Last year I sowed my tender veggies such as courgettes and beans indoors too early which resulted in some of the plants getting a little leggy before the weather was warm enough to put them outside. This year I waited until the very end of April before sowing courgettes, tomatoes and chillies indoors. 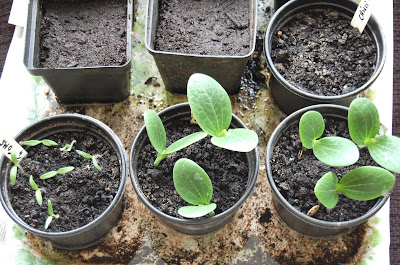 The given advice is to seal in a polythene bag or place in a propagator, but I did nether - just stood the pots on a windowsill and kept them damp. A week later the courgettes and tomatoes started to germinate: this picture was taken yesterday. Looking promising although the chillies haven't made any show at all.
Posted by Plum at 14:38