Whatever happened to that Rhubarb plant?

I bought a rhubarb plant back in the autumn of 2009 which I wanted to grow in a large 30cm/12" pot. In one of the earlier posts this year (1st March), I wrote that it was beginning to show signs of life with a lovely fat bud just beginning to poke through the soil.

I'm not sure whether the house move in April had anything to do with it, but it didn't seem to be doing very well for quite some time. I had already decided that I wouldn't get to harvest anything this year however over the last 3 weeks it's gone berserk, so I've decided to cut, or rather I should say "pull" 3 luscious stems - you're not supposed to cut the stems but pull or twist them off. Also it's recommended to leave at least 2 stems on each plant when harvesting to ensure the crown can build up for next year's harvest.

I would also mention that the pot isn't in full sun as is recommended by many gardening literature. In fact, in my semi-shady garden, it probably only gets sun for a maximum 2-3 hours a day.

Believe it or not, just these 3 stems weigh 350g/12oz which is more than enough to make a rhubarb crumble to serve 2 people, so guess what we'll be having for dessert tonight.

WARNING -I know the leaves look fantastic, but they are poisonous and should NEVER be eaten. 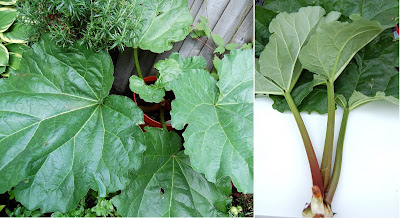