More tales from the shade

I planted two pots' worth of parsley right outside my kitchen door in the main garden bed. It's one of the shadiest parts of the garden and it only gets sun for an hour a day... possibly less. One of the pots I had bought earlier in the year from the supermarket: the type you're supposed to keep on an indoor windowsill. The other was a small pot in which I sowed some parsley seed back in early May.

By June Both were looking a bit tired so I just transplanted them to the only spare bit of open ground I had left. After 2-3 weeks they had both perked up and I have been harvesting lots of fresh parsley ever since. As you can see from the picture, both are still going strong and I anticipate harvesting for many weeks to come.

This is possibly the best parsley I've ever grown. And all just as an experiment. I also planted a similar supermarket basil plant in the same position which has survived and better still, sowed some coriander seeds (just out of view) a few weeks ago which have germinated and whch I should be able to start picking soon. 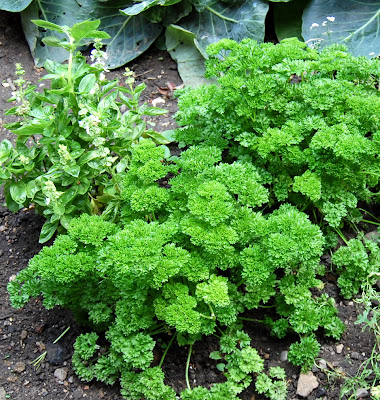