I sowed some peas in a trough and was somewhat dismayed that not many germinated - only 3 in fact. I thought perhaps the seed was old but not to be put off, I put some more in the gaps and yesterday when I looked, a new one was popping up.

Today when I looked I was horrified to find a snail chomping on one of the larger seedlings. 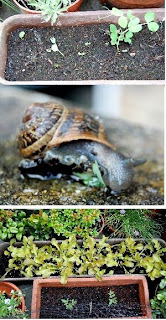 In my other place where everything was grown in pots, I managed to get a relatively slug/snail free zone. I don't like using chemicals on my edibles, but did use pellets just around the pots so none of the nasty stuff got into the soil.

I did the same here but obviously, it hasn't worked too well. Now I know where all the other seedlings have gone. GREEDY SNAILS! This one even clung onto the bit it was feasting when I pulled it off.

There again, strangely, as you can see in the bottom picture, the trough with the lettuce hasn't been touched at all.


I was planning to train my clematis and honeysuckle later today which would mean having to move the pots so I'll put down some more pellets and keep my fingers crossed.

The other strange thing is, the seedlings in the proper garden bed don't seem to have been affected by slugs/snails at all and I certainly didn't put any pellets on that ground. There again, none of my parsnips have germinated so perhaps they started on them first.

I'll have to get some beer in and lay some traps. Slugs love beer so if you sink a container to soil level and almost fill it with beer they plop in and die a merry death. Looks gross though and you need a strong stomach when emptying the container.
Posted by Plum at 10:06