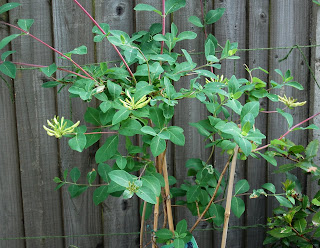 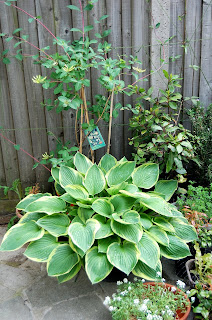 Things seem to be growing at aan alarming speed. So before they all got out of hand, I decided to start training my honeysuckle and clematis plants, both of which are in pots which I brought with me from my last place. At least these two don't seem to mind the lack of full sun.

They are both against a wooden fence next to each other - probably a bit too close if I'm honest. I did start them up canes, but they outgrew those in a matter of a couple of weeks so now I'm tying them to a very basic support I bodged together by hammering in nails at either end of the fence and tying string between them. Worked out fine and didn't take any time at all to put up. The hosta is also doing better than it has done for years.

I'm particularly pleased with the honeysuckle bought last October, which already has quite a few flowers ready to bloom. Looking forward to that wonderful scent.
Posted by Plum at 16:24