Yesterday I finally got to sow some veg seeds in my newly dug garden bed. 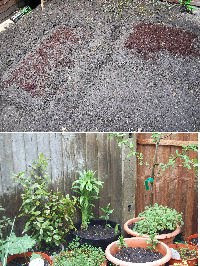 Having not had a proper garden for many years, I found myself automatically creating small beds which worked out quite well as I'm not sure about the condition of the soil much further down than 30cm/12 inches, so the creation of the mini beds has meant I've increased the workable soil depth by about 15cm/6 inches.

As I mentioned before, most of the bed is in shade for much of the day and as planned, I sowed a few short rows each of parsnips and carrots in the shadiest part (on the right towards the back). In front of that bed, I've sown some green and red cabbage and some tenderstem broccoli in a makeshift seed bed. Once they have grown to 10cm/4 inches, I'll transplant them to their final spacings.

To the left in the picture, I've sown Swiss chard seeds and the space I've left between that bed and the fence on the left is for some climbing runner beans which, I am pleased to report, have already started germinating in pots indoors.

Although I've sown "in rows" the rows are short and close together so that once the seed have germinated, I can space them in such a way as to grow all the veg in blocks rather than rows. More about what I'm going to grown in the remaining space in a later post.

The picture below is of some of the pots I brought with me - in particular the lilies seem to be doing well.

Good job I watered everything - as usual the Met's forecast for rain was wrong.
Posted by Plum at 13:26