All dug and ready to rrock 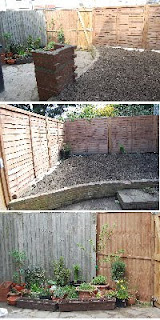 On Sunday I really thought the weather was going to get the better of me, but it only rained lightly in the morning and held off long enough in the afternoon to get the final digging done. Must be honest here, my old man did most of it.

It's the sort of garden bed which one could keep digging from now until next year and still keep finding roots and stones, so rather than delay any longer, we got some of the offending articles out and I'm going to take the chance and sow some seeds in the next couple of days. Still, a vast improvement on what was there (see last post).

As I mentioned in my last post, it's a very shady patch. I had some potatoes which started to sprout so I've put those in the furthest corner as an experiment.

The picture(s) above show the basic layout. All the pots and containers were brought from my last place - including the plum tree which, incidentally, has had a very few blossoms on it which I'm pleased about - and there is room for more containers, in particular the two large pots which will hold a pumpkin and a courgette plant.

I'll have to wing it a bit when it comes to sowing seeds but I've decided to try the root crops (carrots and parsnips) towards the back of the garden bed which gets the least sun, and other goodies towards the front. Haven't decided exactly where yet, but I must get my skates on now the weather has warmed up.

Oh, just in case you are wondering, that strange upright structure in the 1st picture is a "built-in" BBQ - don't know what twit put it there but it's a total waste of space.
Posted by Plum at 11:03