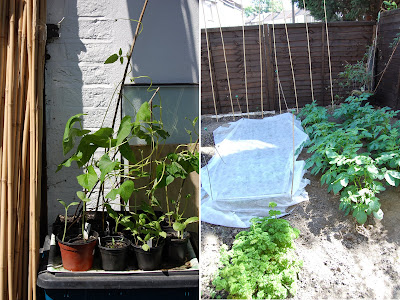 Once again, my runner beans have gone loopy and should be planted out sooner rather than later. Good job the weather has been so good in my part of the world. I skipped the usual steps of putting them out for just 1 hour on the fiurst day and gradually increasing the time they spend outside. I've just brought thhem in in the evening.

My extra long bamboo canes are already in place - they are about 8ft tall. As with last year, I plan to sow some extra runner bean seeds direct in the ground when I put the plants in so i get a prolonged cropping period.

I've done the same with the courgettes, butternut, tomatoes and chillies re hardening off, although I must admit I made a mistake with the courgettes. I placed them on the windowsill of a very sunny window to germinate but it was too sunny and scorched the edges of the leaves. I'm hoping it won't have too detrimental an effect on the plants.
Posted by Plum at 12:03