Can I grow proper watercress at home? 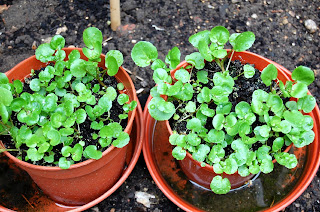 In the past, I've grown land cress which, whilst quite nice, is far more coarse than normal watercress bought from the shop.

True watercress is commercially grown in running water - obviously not possible for the likes of me with my shady, postage-stamp sized garden. However, I came across what seems to be a new variety called Aqua, which suggests it's much more refined than land cress. So I decided to give it a go.

The instructions on the packet recommended growing the watercress in containers which are permanently stood in trays of water throughout their growing cycle so I sowed the seeds outdoors in late April in a couple of 6-inch pots. Germination was a little patchy, so earlier this month I spread the little plants out more evenly to give them space to develop. As the picture shows, they are doing very well, despite the fact I let the trays dry out a couple of times though not for very long - naughty me !

They are still quite small so I have resisted tasting them as they are bound to be tender at this stage, but I reckon it will only be a few more weeks before I can start harvesting.
Posted by Plum at 12:33