In my last post I mentioned nematodes. For those of you who haven't heard of them, they are microscopic organisms - worms actually - which you can buy to combat various pests, in my case slugs. It doesn't mention snails, but I am hoping it will get rid of those too - probably not knowing my luck. 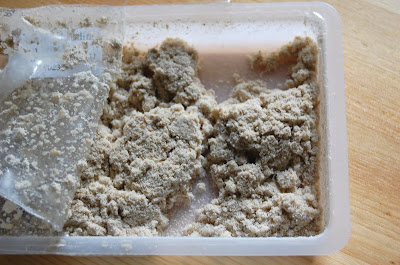 You mix the sand-like substance which contains the nematodes(apparently around 12 million of them) with water then water the ground using a coarse holed rose on a watering can. The amount in the above packet is sufficient to treat 40 sq. metres - far too much for my tiny plot - but unfortunately, the packet has a "use by" date which isn't that long.

Once watered into the ground, the nematodes get to work by attacking the slugs (I'm guessing basically eating them alive) however they are only viable for around 6 weeks after which time more solution can be applied. I won't be doing a second application as the packet is quite expensive (over £8) but hopefully the first application will be enough to get a relatively slug free zone for a while and I will revert to more traditional methods, like beer traps, later in the season if necessary.

You can also get nematodes for other pests such as weevils, carrot root fly, caterpillar, cabbage root fly caterpillar etc. It's an organic form of pest control.
Posted by Plum at 10:03