Back Home in time for spring weather

Actually, I've been back for a couple of weeks....just in time for that lovely bout of sunny weather.

So, you can expect more regular posts from now on. Not that I can do that much outside at the moment as I am still in a state of recovery. I did managed about 30 minutes just clearing some pots and general tidying up but that is my limit at the moment. HOWEVER I can still give instructions to my old man which is just as good when it comes to certain tasks.

He's done a really good job of digging the whole (albeit small) plot over. He even raked it relatively level so it's now ready for sowing/planting. Just as well because I received my seed potatoes a few days ago. More about those later this week.

Anyone with a garden will know growing isn't the only thing which occupies a gardener and in our case, the relatively new fencing needed protecting from the elements. So I got him to do that too so that it has all settled down before I start growing anything up or near it.

Here he is hard at work. 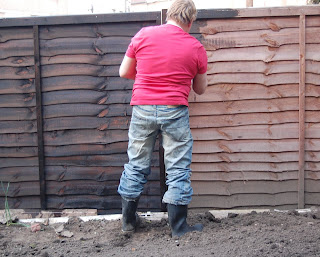