Unlike the summer pumpkins, my pot grown marrow plants haven't produced an abundance of veg. In fact the one in the largest pot has only produced 1 large marrow and the other pot grown one now has a smallish marrow which looks as though it's ripening up and won't get much bigger. Even the specimen I grew in open ground hasn't produced anything noteworthy as yet.

All in all, I think it was a mistake to grow this variety and next year I will go for a variety of courgette which can be harvested throughout the season and then just leave 1 or 2 to get very big to use as marrows. I do love a stuffed marrow! 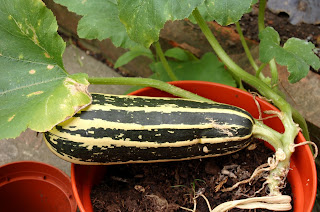 I'm hoping to keep this large one (it's about 30cm/12" long) for a few more weeks before eating it - just waiting for it to ripen up a little more before cutting it to store. Which reminds me of something interesting I saw on Gardeners World the other day. The chap on the program said when you cut marrows for storing, you shouldn't cut the stem close to the marrow to prevent it getting water in the stem and rotting the marrow. When he cut his, he managed to get a sort of T-junction of stems. They should then be left to ripen/harden up outdoors before storing.

Looking at my plant, I can't see how I can do that without severing the main stem although as there aren't any other marrows on the plant, I suppose it wouldn't matter and in any event, I can't see me storing one marrow for more than 4 weeks by which time I will probably have finished harvesting other fresh summer veggies.
Posted by Plum at 11:17