For me, this is one of the most exciting times in the veggie garden because I can see the fruits of my labour.

In an earlier post about brassicas, I was waxing lyrical and said by Autumn I hope to be tucking into some great produce. Well by the looks of things, I think I will be harvesting the first of my broccoli in a week or so. 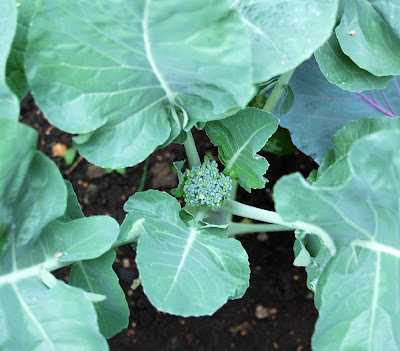 I'm not that keen on normal big broccoli - to me its too much like eating a bunch of immature flowers which, of course, is exactly what they are! I grow the "tenderstem" type which has long edible tender stems (as the name implies) attached to a smaller floret-sized head which, as far as I'm concerned, cook up much better than the normal kind. It also has the advantage that once you've picked the main centre stem, it breaks out into lots of extra stems which go on producing for ages providing you pick them regularly.
Posted by Plum at 12:46